Prior to visiting any of our parks, trails, or facilities, visit MontgomeryParks.org/COVID-19 for more information.

All persons in Montgomery County over the age of two must wear a face covering when indoors at any location accessible to the public.

The program provides for the stewardship of non-renewable archaeological resources and an opportunity for public participation in discovering our past right in your backyard. Learn more below.

Located just south of Rockville, the Josiah Henson Museum and Park contains the core of the 19th century Riley plantation that once covered hundreds of acres. This is the site where the Reverend Josiah Henson –  a Freedom Seeker, minister, abolitionist, husband, and mid 19th century celebrity – was enslaved between c. 1800-1825, along with more than 20 others.  Montgomery Parks now owns the former Riley residence, known as the Riley-Bolten house, and just over 3 of the surrounding acres.

Archaeological investigations have taken place on the site since 2009 as part of the stewardship of the property and later, development of the Museum. The excavations have focused on uncovering any material culture remains of the enslaved population that lived and worked on this property.  Fieldwork has revealed that parts of the Riley plantation survive intact, covered by the green lawns of modern residential lots, including foundations of former structures and many thousand 19th century artifacts. The site has been continuously occupied for almost 200 hundred years, and the features and artifacts reflect the property’s transition from plantation, to tenant farm, to suburban development, and now, to public Museum.

To date, excavations have identified the location of at least two previously unknown structures, a late 18th-early 19th century kitchen midden, a cobble path, fencelines, and an early 20th century road bed related to the earlier farm road. The kitchen midden feature provided an excellent environment for artifact preservation and contained a large number of artifacts related to the earliest occupants of the site.   We are currently progressing with the analysis of all the recovered material and the preparation of a technical report.

Want to enjoy parks programming? Visit our Explore From Home page for fun activities, many from our Archaeology Program, that you can do at home!

The Archaeology Program is working on several ongoing research and education projects to explore Montgomery County's past. See below for more information on each one. 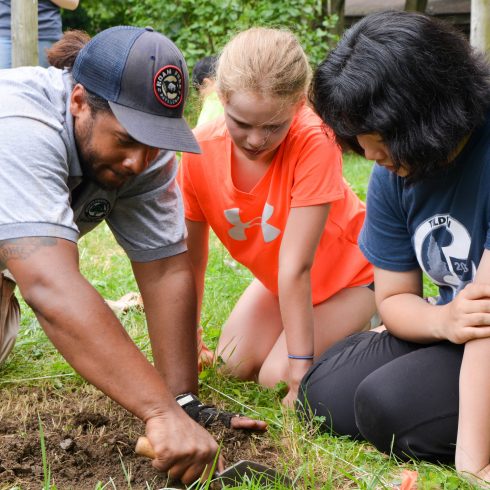 We have made the decision to cancel the Archaeology Summer Camps, due to COVID-19 crisis.  Like you, we are sad and disappointed. But, your health—and the health of our staff–is important to us.  We hope to see you all next year!

Our Volunteer Program is on hold due to COVID-19 restrictions.  Updates will be posted here.

Volunteers are one of our best assets! We encourage the involvement of individuals of all ages in this program. Please don’t hesitate to contact us if you have would like to learn how to become a volunteer in the archaeology program.

We are currently cataloging artifacts from a variety of projects. Volunteers can also participate in public outreach programs throughout the year, and fieldwork during the summer.

You can also join in the fun through a cooperative venture with Archaeological Society of Maryland (ASM) Mid-Potomac chapter. Visit http://www.asmmidpotomac.org/ for more information.

The Montgomery Parks Rules and Regulations on metal detecting and digging on park property is outlined in CHAPTER V: Regulation of General Conduct and Personal Behavior (Code of Conduct) under Section 19. “Metal Detectors, Digging: Using metal detectors and/or digging into the surface of Park Property is prohibited except by permit.” 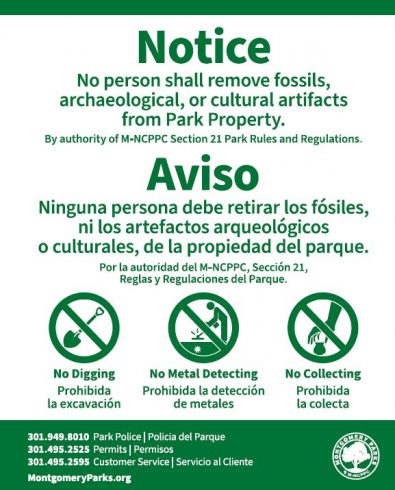