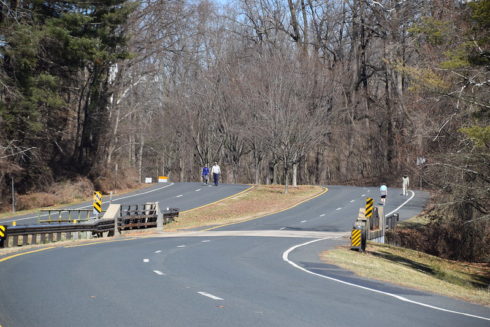 Montgomery Parks and the Montgomery County Department of Transportation (MCDOT) launched a pilot program on June 18, 2022, to study the potential of permanently reducing Little Falls Parkway from four lanes to two (one in each direction) between River Road and Arlington Road (1.3 miles). As a result, the Little Falls Open Parkway program is suspended on weekends and the two-lane parkway is open to car traffic 24/7.

The goal of the pilot project is to eliminate unintended traffic consequences in the surrounding neighborhoods while providing the long–term benefits of the popular Open Parkways program.  If the study is successful, the excess space from the narrowed road will be used to create a new linear park or other recreational amenities, which will be accessible to park users seven days a week.

The study will analyze car traffic flow impacts between Dorest Avenue to Arlington Road and on neighboring streets to evaluate the operational effects of reducing the parkway from four to two lanes. The study is expected to extend through the fall of 2022.

Little Falls Parkway is part of Montgomery Parks’ Open Parkways program which was launched at the beginning of the COVID-19 pandemic to provide more outdoor space for recreation and exercise by closing portions of the parkway to vehicles on weekends. Portions of Sligo Creek Parkway and Beach Drive are also part of the Open Parkways program and are not impacted by this project.

A press release about the pilot project was issued on June 10, 2022. On June 13, 2022, Montgomery Parks started the installation of flex posts, signage, and pavement markings on Little Falls Parkway between Dorset Avenue and Arlington Road. This work is anticipated to take a couple of weeks to complete.